Tamia returns with a beautiful surprise . . . 'Beautiful Surprise' that the name of the first track being released from the same entitled album. Tamia is Infamous for her track with Fabulous - 'So into you', and she now sets down a strong UK release that has already seen success in the US top ten Album billboard chart.

Soul singer and six-time Grammy nominated performer Tamia Hill began honing her stellar voice when she was still a child growing-up in Canada. Living near the boogie down city of Detroit, the then-budding talent was exposed to that city's rich musical history through its deep gospel tradition and booming Motown sound.

"I feel a connection to all types of music," Tamia says from her home in Florida. "From soul to country to gospel, as long as the song has a good story, I'm hooked." Citing Phyllis Hyman and Chaka Khan as influences, Tamia strives to bring freshness to the soul arena. 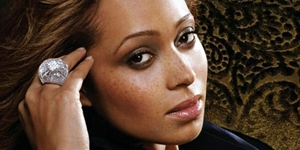 From her brilliant debut single "You Put a Move on My Heart," produced by Quincy Jones in 1994, to her more recent song cycle, Tamia possesses both a hypnotic charm and timeless voice.

In her accomplished career, Tamia has collaborated with a diverse roster of artists including Babyface, Barry White, Missy Elliott, Rodney "Darkchild" Jerkins, Gladys Knight, Eric Benet and Gerald Levert; in 2003, she recorded the #4 Billboard Hot 100 Chart hit ""Into You" with rapper Fabolous.

With the release of her fifth studio album Beautiful Surprise, the singer aurally explores various genres of music, blending her special passion with each style and making them her own.

Recording Beautiful Surprise in various cities including Nashville, New York, Los Angeles and Miami, the multi-talented artist also co-wrote much of the material and serves as executive producer on the project.

Having recruited two-time Grammy nominated songwriter/producer Claude Kelly (Bruno Mars' "Grenade" and Kelly Clarkson's "My Life Would Suck without You") as her co-executive producer on Beautiful Surprise, the two worked hard to create a project that is as diverse as it is soulful. "There was a great chemistry between the two of us which made going into the studio a pleasure," Tamia says.

The masterful producer Salaam Remi, who has also constructed tracks for chart-topping acts the Fugees, Amy Winehouse and Nas, produced the self-titled first single. With its soulful appeal, Tamia describes the mid-tempo love song as "a feel good record."

While "Beautiful Surprise" has already received a positive response from fans and radio alike, Tamia also filmed a stunning video that co-stars her husband, Phoenix Suns superstar Grant Hill. "After twelve years of marriage, he finally made it into one of my videos," she chuckles. "I told him, 'This is your chance, boo.' We shot it at a mansion in Malibu with director Ryan Pallotta and we had a great time."

Introduced to one another by singer Anita Baker, Tamia and Grant married in 1999 and have two daughters. "Love is deeply complicated at times, but it's also exciting and fun," Tamia says. "For me, those are also the best elements to put into a love song." 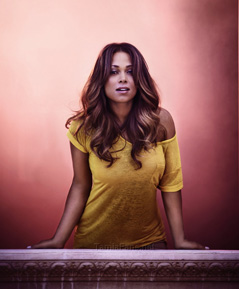 In her honest and thought provoking songs, Tamia has no problem embracing the complexities of love. Yet, as she highlights on the gospel infused "Because of You," it is not just her man's love that keeps her grounded. Written by Shep Crawford, who has also worked with Luther Vandross and Whitney Houston, the sanctified soul of "Because of You" is a stirring track that might surprise more than a few fans.

"As a singer, I refuse to be pigeonholed," she says. "I love to sing all types of music, even opera. I knew I wanted to record an inspirational song and when Shep played me this song, I knew I had to record it." The two had worked together previously on Tamia's 2001's "Stranger in My House," the second single from her sophomore gold-selling album Nu Day.

Although Beautiful Surprise consists of mostly original material, Tamia journeyed to Nashville, the capital of country music, to record the haunting Wynona Judd break-up anthem "Is it Over Yet." Played live in the studio with a hometown band, her voice on this track is simultaneously exquisite and troubled.

"I truly feel a connection with country music that I tried to convey on that song," she says. After completing "Is it Over Yet" in three takes, Tamia decided to use the same band to record a cover of one of her own songs, the Bryan Cox/Jermaine Dupri track "Still." While the song appeared first on Tamia's third album More, she wanted to play with the songs arrangement and perform it with the band.

"They sounded great," Tamia gushes. "We pulled the original song up on YouTube, played it for them and forty-five minutes later, we had a new version. Singing "Still" with the band brings a new character and life to the song."

Though Tamia is known more for her slow jams, she also has tracks on Beautiful Surprise that are perfect for the dance floor including "Believe in Love" and "Lose My Mind." Both songs were produced by The Runners (Keyshia Cole's "Just Like You," and Mary J. Blige's "Stronger With Each Tear") in Miami. "With producers, it comes down to chemistry and these guys were great to work with; Grant came down to the studio as well and we had an amazing time."

Since the 2006 release of her fourth studio album Between Friends, Tamia has also been building her own label Plus 1 Music Group. "The internet changed everything for artists who want to be independent," Tamia explains. "Besides artistically, I've also grown as a business person. From paying for studios to the cost of promotion, I look at it all differently now."

In addition to being a CEO, a wife, a mom and a singer, Tamia also works with various charities. In 2003, Tamia was diagnosed with multiple sclerosis (MS), a subject she is not shy discussing.

"MS is not the death sentence people think it is," Tamia, who is currently in remission, says. "I am still able to raise my children, run a company, be a wife and have a career. Everything that I love, I am able to do."

Beautiful Surprise is a testament to Tamia's love for life, music and everything in-between. Having created a wonderful collection of powerful material, Tamia's songs speak directly to our hearts and soul as though they were our best friends.

TAMIA embarks on a nationwide 22 date US tour with R-KELLY during October through to December 2012.