Enigma Records newest talent DELLA links up with Supatrax with an upclose and personal interview. She discusses bullying issues, how she helped a young girl on Facebook and how her soulful vocals got her down to the last 50 in Glagow's 2013 Xfactor auditions. After getting over 7000 hits for her first ever cover video it's clear she has some soulful vibes that must make blow up in 2014 after the release of her new track 'Make a Wish' with  Shadow Holocaust & Philli G.

Some would say Della, real name Daniella is one of the Bhoys, but we would say she's the new soulful singer to bless us with some sweet vocals from Scotland. (The Bhoys is the name of her favourite football team - Celtic!). Della has been singing since the age of 4. She Progressed through the years with singing Lessons & auditioning for different talent shows for example S Club Juniors , Britain's got talent , XFACTOR and The Voice. She also did a 2 year at college doing Performing arts & Dance, and Music.

Some artists have a raw talent that needs to be trained, but this diva has studied at Clear Water Studios doing Private lessons. She started putting videos online, but never knew how successful they would be . . . Her first cover video got over 7 thousand likes on Facebook after a few hours.

Supatrax: What is your USP? (Unique Selling Point) – What sets you out from the crowd – What makes you different to others doing a similar thing? Della: I think I'm different in my own little ways , I can hit different ranges & I don't just stick to same genre I like music from likes of Bob Marley , Bob Dylan , Tupac , Lauyrn Hill , Right the way through to 30 seconds to mars, I study different types of music also like House trance , Hardcore .. & at the same time the covers I do are likes of Adele , Christina Aguilera. I also have my own style I don't like being the same as everyone else, My hair and fashion is always very different. 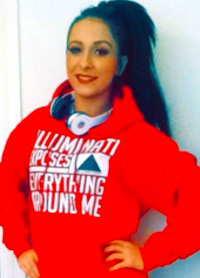 Supatrax: Sum yourself up in a single sentence? Della: Little girl big voice!! Supatrax: Lol - We like that! ;)

Supatrax: What's your greatest achievement so far? Della: Signing with Enigma Records & Getting down to the last 50 out of 8 Thousand people in Glasgows XFACTOR 2013.

Supatrax: What's your worst moment? Della: Bullying!! I have been getting bullied since I was a little girl. Because I want to pursue in my dreams and people didn't like that.
Supatrax: If you weren't doing what you're doing now, what would you be doing? Della: I would be still searching for my dream.
Supatrax: Do you feel you have any extra responsibility as a role model? Della: YES!! Because a little girl came to me via Facebook , and told me how she had lost her dad to suicide and how she didn't get along with her mother , She is 14 year old a beautiful little girl and she is troubled at school , she told me that when she listens to my voice and my covers it is really the only thing that gets her through the day and makes her feel so much better, She told me that I inspire her & Since then I've been her friend and speak to her regularly on Facetime , Texting , & Facebook . So I feel like I need to do it for her and all the other young girls and boys who are getting bullied cause I know what it feels like to be bullied.
Supatrax: What advice would you give to some one who’s just starting out aiming to be in a similar position to yourself or better? Della: My advice would be "There's pain flow , a rain show before you ever see a rainbow" & Never give up , Cause you dreams can always be reached.

Supatrax: Name some of the people that inspire you. Della: Whitney Houston & Lauryn Hill. They inspire to me to continue & Not give up!

Let's get a little more personal with a few HOT questions . . . Don't blush! 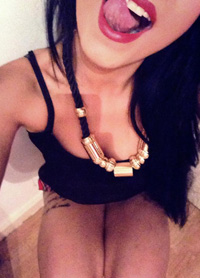 Supatrax: Are you single, looking, married or just working hard? Della: Happily Single
Supatrax: Who would be your perfect partner? Della: My secret Crush is Justin Bieber haha Supatrax: Are u teeking the p**s! This interview might have to end . . . . Della: Eminem would be the perfect partner. Supatrax: Ohhhh OK . . . . No more of that Bieber talk round here! LOL!
Supatrax: What is a definite fashion no, no? Della: I don't like Kitten heels!! I like Big Massive Heels. Supatrax: Mind yu don't break ya neck missy!

Supatrax: Favourite music artist? Della: Tupac! The mans a hero!
Supatrax: Favourite food / meal? Della: I love my mums homemade Cabonara.
Supatrax: Favourite football team? Della: Celtic are my Bhoys!!!
Supatrax: If you had 1 item to save from your home, what would it be? Della: My iphone , I love my phone.
Supatrax: What's more important – Money or love? Della: Love!
Supatrax: Cheesiest chat up line you've used / heard? Della: Some one mailed me on facebook sayin "I heard your ankles are having a party , Want to invite your pants down" – He got blocked! Supatrax: Lol! Might have to use dat one!
Supatrax: Legalise weed or not? Della: Legalise It!
Supatrax: Best music track out now? 1 only! Della: Monster – Rihanna & Eminem
Supatrax: Best music track ever? – 1 only! Della: Only god can judge me – Tupac
Supatrax: Your passport says British (or does it?) – What's your Heritage? Della: I'm Half Pakistani, but born and bred in Britain
Supatrax: Tell us a joke? Della: Knock knock – Whos there – Dishwasher – Dishwasher who? – Dishwasher way i spoke before I got my teeth fixed. Cracks me up all the time haha! Supatrax: Don't give up the day job . . . Stick to singing!

Supatrax: Is there anything you'd like to say and where can people get at ya or hear more from you? Della:  BIG SHOUTOUT TO MY TEAM AT ENIGMA RECORDS .. PhilliG , RTurnz , Noctambulous1 GeorgieBritish & My Boy Logik- Also a huge shoutout to my Family , My mum for being my bestfriend and helping me get to where I am! Big Enigma Takeover. Keep your eyes open! Peace!

Web: www.enigma-records.co.uk or get over to Ibiza this year, I will be performing this year in IBIZA at Ibiza Rocks!! Her new track will be available for preview on http://www.soundcloud.com/officialdjphillig ... and releasing on iTunes 1st April 2014.

Keep it locked to Supatrax for further info.