Rax continues his most ambitious project to date with the release of the second video from 'The Black Crook Project'. Based around Charles M. Barras' 1866 musical 'The Black Crook', the project will see Rax release 1 new video every 2 weeks for 6 months!

Rax is a 20 year old rapper who demonstrates clear professionalism within his video production of 'The Wholemeal Freestyle', as he feels his music in depth. He makes it sincere with a 'wholemeal freestyle rap'.

Rax has great lyric flow that broadly states within his UK talent with impeccable, smooth, constructive lyrics. He establishes clear focus and musical intellect showcased within each lyric as he lives for music as his music has a visual explosion.

Rax found his microphone skills from the age of 15 before signing with fast rising musical enterprise Clear Cut Entertainment/Audio Surveillance Records. The charismatic emcee then released his first solo long player titled 'The Auditions' in 2009. 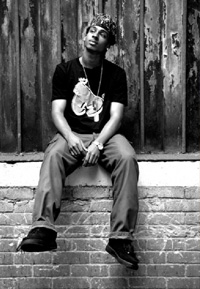 The mixtape went on to receive over 1000 downloads within the first few days of its release, with hard copies of the project proving equally as popular on the streets of London. Rax then released several viral videos (including his unforgettable 'I Wanna Rock' remix which clocked up over 30,000 views on YouTube), before putting plans in motion for his most ambitious project to date - #TBCP.

The second video from The Black Crook Project sees Rax in the studio doing what he does best, delivering almost 3 minutes of pure straight spitting. Utilising the instrumental from Nas 2009 anthem Film. Rax proves that despite his young age, critics would be foolish to presume his lyrical dexterity doesn't surpass far beyond his years.

The video is the perfect follow up to Part 1 of The Black Crook Project, which received outstanding press support and has clocked up over 14,000 views on YouTube since its release just two weeks ago (October 2011).

Rax has his own 5 piece live band which he performs with on a regular basis.

Rax is also a talented video director & editor, and is contributing his skills throughout the #TBCP project.

Rax has worked on projects for many major TV companies including BBC and Channel 4.

Keep it locked to Supatrax for future Rax releases.