School girl stabbed to death on bus in Birmingham

A young girl named as Christina Edkins has needlessly lost her life toady after being stabbed to death in Birmingham City Centre today by a 22 year old (p***yhole) man on a bus while on her way to school. Passengers on the bus battled to save Christina's life by giving her CPR until paramedics arrived at the scene, but despite their efforts, the schoolgirl was pronounced dead at the scene.

Hundreds of tweets and tributes are being left by the minute on Twitter and many people have called for the most servere punishment for the person responsible for the stabbing. Many share their condolences and thoughts for her friends and family. Others have shared their fears of travelling on public transport.

The tragic incident took place on Hagley Road in Five Ways Birmingham City Centre at approx 7.30am. A man was seen running from the scene which launched a city wide man hunt.

Officers from across West Midlands Police force, including police dog handlers and firearms officers were involved in the manhunt for the person responsible. They saw a man fitting the description and acting suspicious and a chase took place before the man was arrested on suspicion of murder.

Leasowes High School in Halesowen, the school Christina attended, are working with police and a team of counsellors to provide support to their pupils and staff. The headteacher described Chiristina as"a bright and popular student" who was "much loved by staff and students alike".

He added: "We are deeply saddened to hear this tragic news and our thoughts and hearts go out to her family and everyone who knew her." 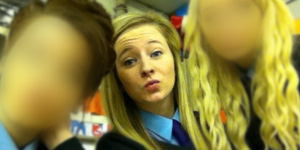 Knife crime is a massive issue that needs tackling, and many feel enough is not being done as knives are so readily available for young people to buy and obtain. Sentencing is now much more harse for people convicted of knife crime, but this is not a deterrent to young people.

The law states that it is illegal to:

There is a complete ban on the sale of some knives:

During the year to June 2012 there were approximately 29,613 recorded offences involving knives or other sharp instruments, accounting for 7% of selected offences, a similar proportion to previous years. The number of knife offences recorded was 9% lower than in the preceding year.

According to the Crime Survey for England and Wales (CSES) in 2011/12 a knife was used in 6% of all incidents of violence experienced by adults, similar to the previous year's proportion

A Court of Appeal judgement in May 2008 said that magistrates should normally sentence those convicted of knife crime possession offences at the top end of the range. Following this custody rates and average custodial sentence lengths have risen.

This killing a tragic and such a sad loss of a young girl who had her whole life ahead of her. Condolences go out to her family and friends.