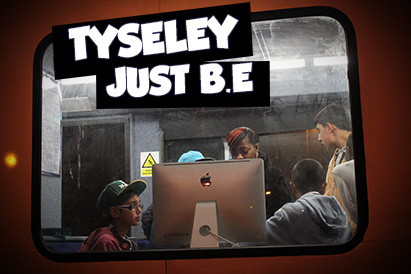 Tyseley's JUST B.E project started of being based at the Tyseley Youth Club and finished off in the car park outside the centre :$ The Youth Centre had pre booked events taking place at the centre. The young people in Tyseley didn't have much to do in the area and as word spread about the project more young people came to the youth bus to get involved.

JUST B.E proved a great success with the young as there was such a proud range of skills on show in Tyseley.

Tyseley's WHACK!
There's too much weed, coke and crack
Vandalism - car windows gets smashed
It's time to - face up to the facts

There's always trouble, so Police are on our backs
Loads of rubbish – Equals loads of rats
Why do our parents pay Council Tax?
And snakes and fakes will rob your hats

Unnecessary drama, random fights
And the kids are always out at nights
Too many people are carrying knives
They don't respect anybody else's lives

We're not on road where the guns get buss
That's why you find us on the youth bus
Positivity for us, that's a must!

When it comes to papers – I'm earning em
As for all my haters - Not concerned with em
All the man's heads - I be turning em , turning em

Tyseley is a really horrible area to live - a terrible place!

There is too much issues with drugs like Marijuana, Cocaine and Crack Cocaine.

There is also too much vandalism, for example car windows are always getting smashed.

Due to trouble caused by others in the area, young people are always stopped by the Police.

If you put too many bad people people in one place, they will influence others in the area.

With the poor quality of the area, why should our parent pay their Council Tax?

And to make things even worse low lives and fake friends in the area will rob you for your possessions.

There's always unnecessary arguing and fighting in the area.

Young people and kids are always out late of a night time.

A lot of people in the area carry knives and they don't respect other people's lives so are willing to use them to settle arguments.

We need to stop with theunnecessary arguing and fighting.

We are not the type of young people on the streets in trouble mixing with guns etc.

We'd rather be on the Birmingham City Council Youth bus.

As we would rather be involved in positive activities rather than getting into trouble.