It's BIG & It's Back . . .   But you don't need to be a Eskimo to attend the Eskimo Dance! . . .GET YA TICKETS!!! IT'S Party TIME!!!!!! ESKIMO DANCE RETURNS TO CONTINUE THE ULTIMATE GRIME EXPERIENCE! FROM THE MIDLANDS, TO AYIA NAPA…BACK TO THE CAPITAL; LONDON!

Following a 6 year hiatus, legendary Grime event founded by Godfather of the Genre Wiley returned to entertain the masses in 2012. 4 SELL-OUT dates spread across the year saw the event jump straight back to the top. The first 3 events were held in London’s prestige venues Proud2 & Indigo, one of which was sponsored by “Smirnoff” after winning the “Battle Of The Clubs” competition beating Ministry Of Sound by a mile. After the phenomenal success of the 3 London dates, the Eskimo Dance team decided to spread the ultimate Grime experience to the Midlands. Holding another edition to the string of events in Leicester’s 02 academy, with another sell-out venue; Eskimo Dance is going from strength to strength. If that wasn’t enough Grime infused partying for Eski fans, the legendary event unveiled the date for the first EVER international Eskimo Dance, on Ayia Napa’s luxurious Kandi Beach. After months of hard work and organisation, the event went down in HISTORY as one of the MOST talked about Beach Parties ever in Ayia Napa! The Grime fans flew out in force, making it the most attended party on the island this Summer.

Due to public demand, we are thrilled to announce the return of Eskimo Dance to its hometown; London!  Eskimo Dance is renowned for being the most successful Grime event to date, boasting a night full of electric bass-fuelled vibes and energetic performances from the elite artists who hold the Grime genre. The team behind all the hard work have told us “Our last Eskimo Dance was bigger than anyone of us could of imagined but we know there was some people who couldn’t make it out to Cyprus due to work commitments etc. November is all about celebrating the pioneers of the genre, the brand and re-living the best moments from our last events, we can’t wait!” 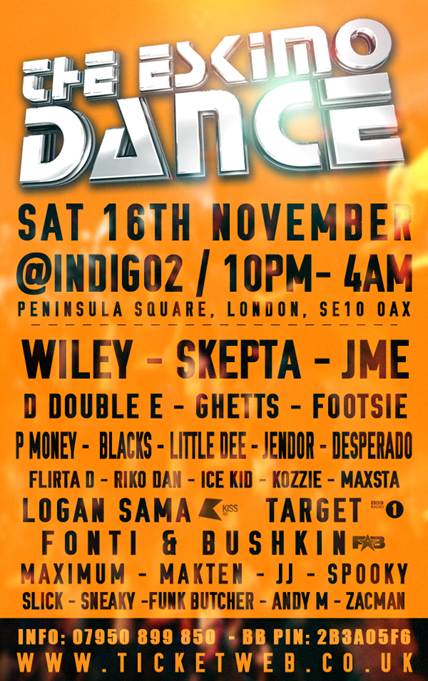 Expect big names, guest appearances, performances of tracks and crazy freestyle sessions. The event will be an incredible affair, partying until the early hours for everyone with stamina! As always, ravers will be entertained by a colossal line up of Grime household names, all prepared to give you the best of them at 140bpm. Attractions on the day also include professional dancers, photography, multiple giveaways, competitions etc.

With the events of 2012-13 retrieving coverage from commercial publications such as Time Out Magazine, The Metro, The Guardian, The Independent, The Mirror alongside leading online platforms including SBTV, GRM Daily, Link Up TV plus many many more we are confident that this is not an event to be missed by ANYONE! Why not come, get involved and judge the monumental Eskimo Dance for yourself?