Watch out for the Thief In The Night

Kwamz is a young London talented rapper who is ready to drop his debut single 'Thief In The Night' on the 4th March. This upbeat and mood-lifting track is co-written by Kwamz with production by Jay Reynolds (produced for L Marshall, Elton John, Kylie Minogue, Pixie Lott, Just Jack) and Delerious (production for Cleo Sol, Stylo G, Chip, Taylor Jones & Marvell). 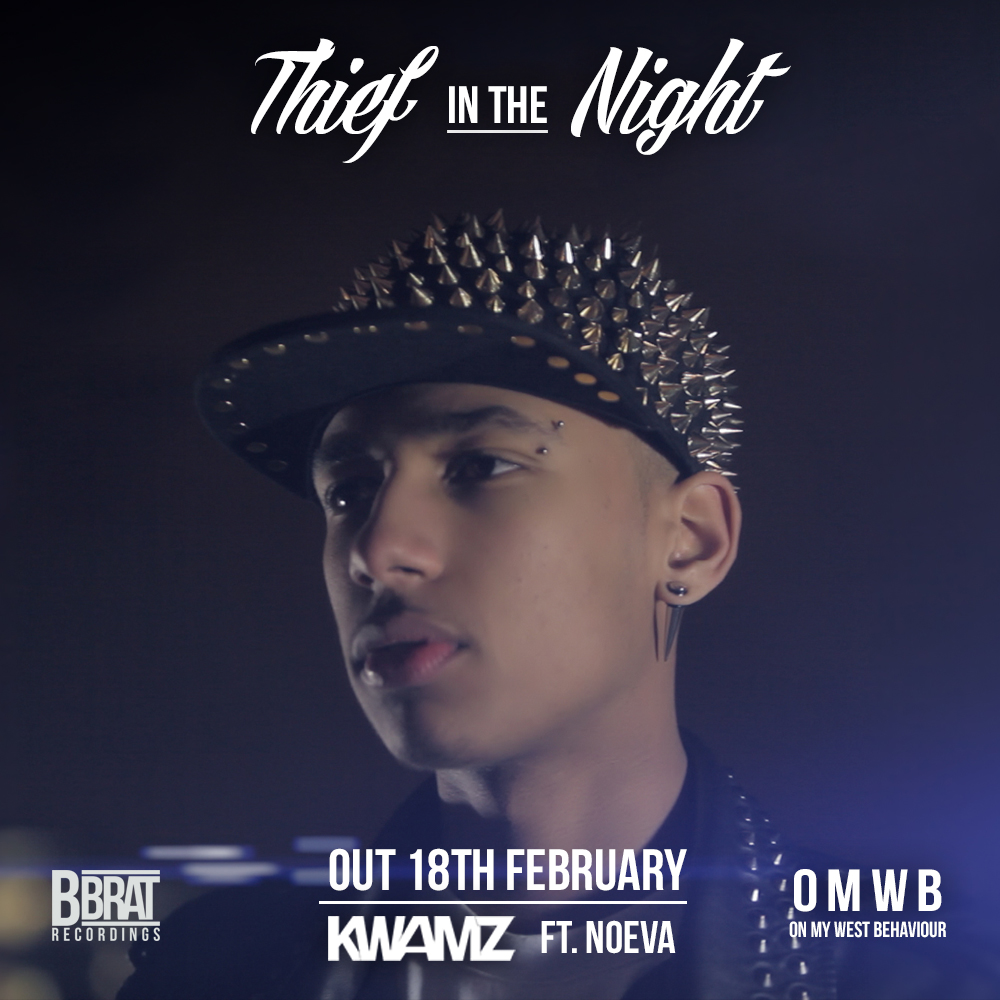 "Thief in the Night" also features a beautifully sung chorus from R&B/Soul singer Noeva who recently featured on Terrorsum's single 'Calling Me Home' (premiered on SB.TV) and headlined on the bill at Wembley Arena for Africa. 'Thief In The Night' has the energy of a club anthem that will surely keep the ladies moving and dancefloor shaking. In addition, Kwamz stands out from the crowd, not only as a lyrically experimental rapper but also as a young social entrepreneur. He is actively inspiring a new generation with his messages of positivity and his call for brining together and empowering the youth of today with his On My West Behavior (OMWB) movement that features in the video, where you see this movement spreading across cities.

Originally from York/Leeds, now London based, Kwamz is ready to make a big impact in 2013, after building a substantial online presence during 2012; Kwamz has generated well over 500,000 YouTube views on his music videos on various sites plus tens of thousands of Twitter and Facebook followers, e.g. last week Kwamz trended Top 5 in the world on Twitter... Kwamz is also going International with gigs at the 67 Club in Paris on the 9th Feb then playing the Crystal Club on the 10th Feb both on the Champs Elysees, while shooting a new video and meeting up with the legendary MC Solaar to talk about collaborations on the 11th Feb and doing some TV interviews about his French launch.

With several soft releases over the last few years mostly of his own productions including the Channel AKA playlisted Drifting Away and his recent Krept & Konan collaboration 'Night To Remember' that is a featured track on the new E4 TV series "Youngers" in March 2013 as well as a second track "Eskimo" plus X-Factor finalist MK1's Charlie featuring on his track "Inside of Me".

In the summer of 2012, as a part of the PeaceMix Tour project (peacemix.co.uk), Kwamz completed a 12-city tour across the UK and Ireland entirely organized via social media. The project is aimed at inspiring youths at risk of gang-related activities and channels them into positive music projects instead. The tour included some of the UK's roughest urban areas including London, Liverpool, Leeds, Glasgow, Derry, Newport, Newcastle, Nottingham, Manchester, Bristol and Birmingham etc. The finale of the tour saw Kwamz close the show for Tinchy Stryder at the Roundhouse in Camden to a packed out venue!

Fast forward to 2013; Kwamz has just signed to BBrat Music a new label and creative social enterprise and movement dedicated to promoting emerging UK youth talent. 'Thief In The Night' is the warm-up to Kwamz' forthcoming EP.