Their coming, their here . . . . It looks like there is gonna be a rar takeover!!! The Alien Invasion is here and things are gonna get messy in the music industry!

Alien Invasion is the new track from the Invasion camp here from Birmingham. The team has been lighting up the UK scence over the last couple years and many would have heard of JK and Sox amongst others.

This new tune features Hitman, Invasion founder - Vader, and Tazzle alongside Knox Brown. The track is a BANGA, truss me this thing will have the US and UK on Alien Invasion alert! Vader, Hitman, Tazzle and da rest of da man better beware they don't get a call from the FBI cus this is gonna cause some major Alien Invasion activity! LOL!

Alien Invasion is produced by Morpheus and Gbeats and features Hitman (Who's own mixtape is near completion!), Vader (The Vet) & Tazzle alongside Knox Brown who supplys a hook dat made me pull up the tune while I was listening to it on my own! POW!

Click here to hear it played live on the Logan Sama Show on Kiss FM. 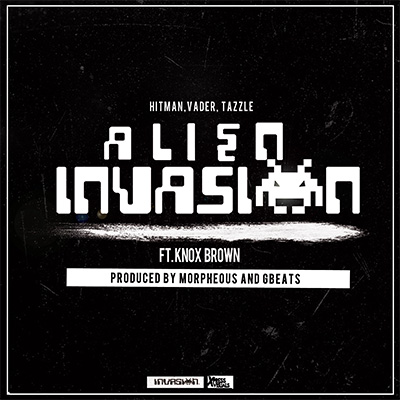 The track is released on Monday 27th May 2013 via itunes, Amazon, Juno, Beatport and all other on-line stores - Mek sure you get a copy and support the Invasion takeover. It's only 69p on Amazon . . . Don't be a tramp - support da ting!

The video is also ready to drop very soon. The video was shot by TID Xpress Visuals will be featured exclusively on SBTV.

Keep it locked to Supatrax for interviews and more info.