VickySola, birth name 'Victoria Ekundayo' has been heavily influnced by artists such as India Arie, Fantasia, Jasmine Sullivan, Omawumi and Asha but seems to have a mix of all of them packed into one young 21 year old woman from London.

VickySola is known by her friends as being Hyper, Funny, Loud, and Energetic and this come across through her style of music which is a fusion of RnB soul, pop, Afrobeat, and contemporary Jazz with a strong ballad emphasis. She has linked up with producers to make some smash remixes of her latest track entitled 'OMG'. Her mellow vocals excel on the remix produced by OSIKI "Ozzie" OJO (Triple o productions). The OMG single is now avialable to hear on SoundCloud with 3 other remixes!!!

This meek yet vibrant lady brings a diverse feel to the music industry, with her own style of what she calls "Afro Brit"; Victoria brings newness to the entertainment industry with eager ears waiting to be hit by her creative melodies. 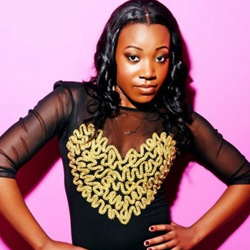 In 2010, at the age of 11 VickySola started singing in church and in her school choir. At 13 years Victoria took up dancing and has not stopped since. Not only is music a talent in which Victoria grasps, she also knows how to shake a leg and I am not talking 'two step'. Whether it is Street dance, contemporary, break dance even Jazz Victoria is not afraid to pull it off. Dancing at Venues such as the wonder Sadler's Wells theatre, Royal Festival Hall, Brixton Academy and O2 indigo her great talents are really put to show and speak a lot for themselves. Getting as far as boot camp in the Popular 'X Factor' COMPETITION 2010 and WINNING the 'B Supreme Dare to dance' Competition 2008 with her then dance group 'Stylinquents'with a sponsorship from 'NikeID' Victoria is without question extremely skilled at what she does be it singing or dancing.

Vicky has also performed at Britain's biggest event, London 2012 Olympic Opening ceremony, with seats filled with 80,000 people. Singing is clearly second nature to Vicky as she has shared her beautiful voice at performances in the amazing Royal Festival Hall and astounding Royal Albert Hall. Audiences and big venues come to no surprise to this dime.

It was after graduating from University with a degree in Dance, Vicky began to pursue her music career vigorously. She is constantly recording in the studio with some of the most talented and relevant producers today within the music industry. She is currently signed to independent record label '6060Music' under the management of Nosa Dag. Victoria has new material which is ready to knock off the usual chart toppers and bring back that dissimilar vibe to music.

Supatrax caught up with Vicky to ask her a few questions:

What training, qualifications, experience, and awards have you got / required? Please list artists,  venues or promotions you have worked with etc.? I started singing in church/school/community choirs using the opportunity to train my vocals and performance. In 2010 I was on the X-factor, which I got up to the top 50 girls at Bootcamp.

I have also performed at the 'Afrobeat Night' at the Social Bar for Exposure PR and Wyldpytch Records. Link to the live performance: http://www.youtube.com/watch?v=zMcUfprRWF0 I have performed at The Afro-beats Educational Road Show for Strictly Entertainment Music and many more shows to come in the future.

I am now a graduate for University of East London with a BA HONS Degree in Performing Arts Dance, trained in styles such as Afro-Contemporary, Waacking, Breaking, House/Afro-House, Nu-style. I have also performed in venues such as indigo O2, Southbank Centre (Royal Festival Hall/Purcell room), O2 Brixton academy, Paul O Grady show and last year I was performing as a professional cast at the London Olympic opening ceremony in front of the world, the list goes on.

I also choreographed and performed my first solo dance piece called 'Women Know Your Value', which was performed at Stratford Circus in May 2013. Link to the performance: http://www.youtube.com/watch?v=4fckQ6ys7m8 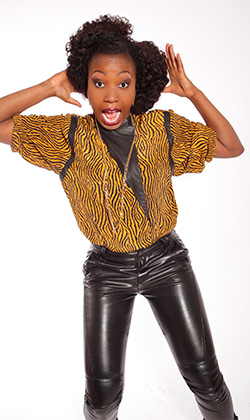 What is your USP? (Unique Selling Point) – What sets you out from the crowd – What makes  you different to others doing a similar thing? Well, I uniquely brand myself as an Afro-Brit artist. Which is an international sound adding flavors of Africa inside the cooking pot with a British twang lol, this also emphasizes my up bringing as an African born in the UK. Representing African music all the way!!!

Could you sum yourself up in a single sentence?

Vicky Sola is Hypa, Loud, energetic, with full of life to share onto others.

What's your greatest achievement so far?
My greatest Achievement so far was given a once in a lifetime opportunity to perform at the Olympic Opening Ceremony 2012 in front of the whole world.

If you weren't doing what you're doing now, what would you be doing? Hmmm I think I would be doing a 9 to 5 job because I don't see myself doing anything else but performing, singing and dancing. As I believe I must pursue in the entertainment industry.

What advice would you give to some one who's just starting out aiming to be in a similar  position to yourself or better? First of all you need to be sure on what you want to do in life and stick to it. Don't give up!! No matter the situation because you are always going to get people trying to discourage you. Stay grounded and humble and keep smiling :D

Who were / are your role models?
Jesus! 'The way the truth and the life' is my role model. I wouldn't be in this position if it wasn't for him. Thank you papa! Amen to dat!

Any shout outs / Thank yous?
I would like to express my deepest appreciation to my manager Nosa (6060music) who has always been there from day dot and Ozzie (Triple O Productions) for all his hard work on VickySola.

My gratitude goes out to my late dance teacher Neriah Kumah for all her support when she was on this earth R.I.P.
Shout out to all my friends, family and supporters! Love you all!!

Where can people get further info about you?

My 'OMG' single should be released late this year with a cool video, and I'm also working towards an EP/Album... so keep your eyes peeled.

Facebook: VickySola
Twitter: @ThisIsVickySola
Soundcloud: VickySola
For booking and enquires contact This email address is being protected from spambots. You need JavaScript enabled to view it.

Keep it locked to Supatrax and Stickyradio.com for further info.