I've been following Nas and Jays career since way back, and if you know your about these two MCees and you actually listen to their lyrics and try to understand them, you know these are 2 smart lyricists, I mean in a knowledgeable way as in books, religion, certain "cults", specially Nas. We've all seen Nas transform through his career, most call it him being a hypocrite, but I think this guy just has a thirst for knowledge, and he grows as he learns. This explains him goin from a Christian, to wearing kufi's, to becoming a Freemason . . . ?

If you read the Internet forums you'll find Nas and Jay-Z are high standing Freemasons. There are numerous views, beliefs and myths about the Freemasons, so we've looked at the whole subject and what it means. Below is an extract from an internet forum post: If your up on Jayz, you know about his anti-god stand in life, and alot of times his subliminal message in his songs:"If Jehova witnessed bet he'd never testify", on the track called D'evils, or, "Never prayed to God I prayed to gotti", "Raise hell til its heavon", the track Lucifer . . . He's been on this tip since he came into the game, hes been a mason when he started rocafella thus the dynasty symbol being a pyramid. Then he went and called himself J-Hova (Jehovah) similar to the traits of a Mason, who think of themselves as Gods - they feel they're superior to the rest of the world.

On a Freemason website the principles that Feeemasonary is founded on are:

Brotherly Love means that every true Freemason will show tolerance and respect for the opinions of others and will behave with compassion and understanding to his fellows.

Relief. From earliest times Freemasons have been taught to help, to the best of their ability, those in distress. without detriment to any who are dependent upon them, and to give their support to outside Charities.

Truth. Freemasons strive for truth both in their view of themselves and in their dealings with others. Masonry requires high moral standards and its members endeavour to uphold these principles in their public and private lives.

The whole thing with the masons is they recruit powerful, rich people, so most of the music industry is down, I've been knowin about this for years in rap, and there are alot of knowledgeable cats in the game who are up on this stuff, Nas, Pac, Jay, Ra, but the 2 dudes that were anti illuminati were Pac and Nas, Pac made the track "Killuminati" and Nas came at Jay with "Ether" that had a lot of his masonic jabs in it.

Ether has a few meanings, it is described as the area in outer space, and its a chemical liquid, when inhaled, is like a strong drug, trips the hek out of people - it separates your mind from your physical, people on it have visions of God, devil, galaxies, euphoria, and it is said that back in the day when there were possessed people, the priests would drug the possessed with Ether. It was believed to kill the evil inside of them, this is where Nas' track title comes from: "Ether, that sh1t to make your soul burn slow" When you become a Freemason and you get your first degree, you have to go through a bunch of rituals, and eventually sign your name on paper, there are a lot of theorists that say that is when you are signing your soul over to the devil, then its believed you receive good fortunes, i believe this is what Nas meant when he said: "I love you cause your my brother, you traded your soul for riches" I always believed Jay and Nas' war was more than just a lyrical thing, and their dislike started before any Carmen ting.

Nas was very pro-God, and Jay was the opposite, on one hand you got one dude callin himself (J-hova) God himself, then u got God's Son, meaning god sent, to destroy evil and protect, I saw it as more of a spiritual battle. With this said I was so shocked when I saw them squash the beef, not just that, but they met on stage, and since when do two hip hop rappers shake hands?? Not only that . . . it was in a Masonic grip to let the whole world know whats up (those who recognised it knew at lease . .. and their the ones who matter.) 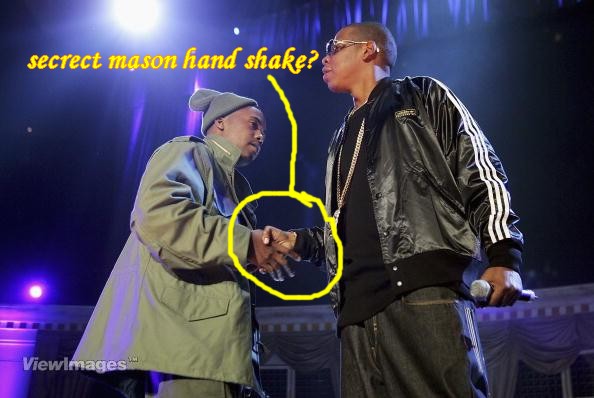 Then all of a sudden Nas retires his Cross chains and gets a new Egyptian chain, which is where Illuminati started, with the whole pyramids and all. On the track released after that, Nas was talkin about "I slow dance with the devil" and "annuit coeptip (literally translated as "He approves (or has approved) [our] undertaking(s)"), the plan and the message", what happened to his mom slow dancing with Jesus on Gods son?" [Internet post ends]

This is belived to be a Masonic handshake.

So what does this all mean if they are Freemasons - What does that mean for the Rap game? Does it mean that Jay-z could become a USA Black Hip Hop version of Simon Cowell? What are the subliminal messages sent via Hip Hop / Rap tracks? and what are the reasons for the messages? . . . Keep it locked to Supatrax for further info and send your views to This email address is being protected from spambots. You need JavaScript enabled to view it.