Forget the MOBO's George gonna turn us all in 2 HOBO's

While you were all snuggled up in the corner of you sofas last night with your eyes glued to this years MOBO awards, the nation's Chancellor, George Osbourne, revealed his radical plans to cut public spending by a whopping £81 billion! So I hope you all have a Plan B because these cuts are going to leave you with way more than a Tinie Tempah!

As you may know, this country is in a economic crisis the national debt totals up to over 900 million pounds and the government predict it w 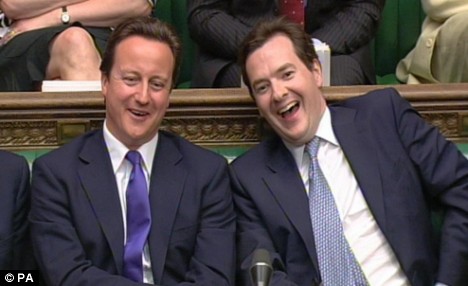 ill soar to an alarming £1.1 trillion by 2011. But don't worry folks our "CON-DEM" coalition government have vowed to breathe the life back into are dieing economy.

Saviour of our nation, George Osborne, has CONjured up the perfect solution to pull this country back from the brink of bankruptcy: raid the pennies from Britain's poorest pockets and let them, bail the government out of a desolate debt pit.

Those good old school re-unions spent reminiscing in the dole queue will soon be a thing of the past as the Tories merciless axe will slash £7 billion from the welfare budget and that's on top of the £11 billion cuts that were previously announced. Government sources say that 200,000 people will lose their employment support allowance due to the welfare's new means tested regulations. If your weekly household income is over £90, and this includes your partner or parents wages, than you will no longer be eligible to claim for unemployment benefits.

But don't worry folks because the Conservative party have vowed "we are all in this together" and you only have to read the headlines of today's newspapers to find evidence that will support their claim. On the same day Sir Alex Ferguson offered Wayne Rooney £300,000 per week to stay at Manchester Utd the government revealed they will rip the food out of the poorest mouths in Britain to compensate for the national deficit.

The shadow cabinet chancellor, for the labour party, said: "The chancellors claims to have saved Britain from bankruptcy is total nonsense. There was a way to cut the deficit without diminishing our society and communities. This is a great cruelty and great unfairness being introduced into our society."

Labour leader, Ed Milliband described the 2010 spending review as a "reckless gamble with the economy" after it was announced, nearly half a million public sector jobs will be lost.

These jobs range from binmen to college lecturers. All of which will be made redundant and left to survive in a cesspool of the unemployed who've been neglected by the welfare system.

Just as Britain awoke from a coma like recession the government have imposed the biggest cuts to public spending since world war 2. Unison leader, Dave Prentis said the cuts were driven by Torie ideology and "the no hope, no ideas cuts agenda is poisoning the country's chances of recovery."

Surely the billions of pounds this country is using to fight an illegitimate war should have been considered for the chancellor's blood stained axe. As opposed to the necks of the working class.