For years, their has been a mystic speculation that there is a gay rapper in the hip hop game. Do these shocking pictures of Lil Wayne lunging in for a good old tongue wagging with his record executive prove the speculation is actually a reality? Take a look at the pictures and decide for yourself. 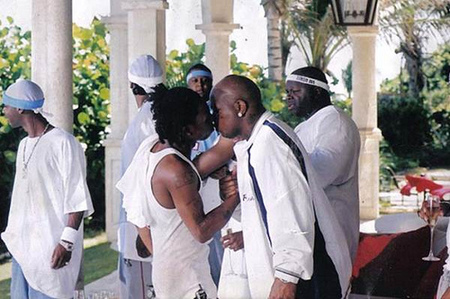 I could just imagine the look on Lil Wayne's face when he woke up to see pictures of him canoodling with another male spread across the front pages of every rap magazine in America. I bet it was the same look Wayne Rooney had when The Sun newspaper revealed his fetish for shagging gum grinding grannies.

The funniest thing about this whole scandal was how all the Weezy fans rallied behind the man smooching rapper and came up with reasons why this behaviour was acceptable.

The most common explanation is that Lil Wayne and Baby are father and son and this picture is nothing more than a symbol of family love. Fellas I'm sorry but if you are over the age of ten and still kiss your dad its very likely your a victim of abuse so holla at a solicitor and see if you can claim some compensation. Now if your a man and you kiss your dad on the lips, well..... there's an explanation for that it's called homosexual incest!

I'm sorry to disappoint you Weezy fans who clung on to this story as some kind of salvation, but Lil Wayne and Baby have no relation to each other what so ever. Lil Wayne met Baby when he was aged nine, after he impressed the Cash Money C.EO, then 21, with freestyles he left on his answering machine.

I am not going to even go into why Baby had nine year old boys ringing up his phone, that sounds like a heavy law suit, but what I am going to address is why they have engraved their bodies with tattoos dedicated to one another.

For most men the idea of getting your partners name tattooed on your body is something you do to solve decades of ear aching nagging; when your old, wrinkly and have to save your marriage because you've been caught having three affairs. However for these so called "blood gang" members theirs nothing more gangster than getting another mans name tattooed on your shoulder or even another mans face brandished lovingly across your chest.

If you get caught kissing a man on the lips and you have that same mans name tattooed on your body and your hit record is about licking rappers like a lollipop maybe you shouldn't be surprised that people think your homosexual.

Not surprisingly, the skinny jean wearing, lip ring bearing rapper didn't have any comments to make on his man kissing antics. Instead he released a series of web blog videos showing his journey to Rikers Island. (A infamous New York prison.)

The courageous New Orleans rapper showed no fear during his road to Rikers Island, One might even say he showed feelings of excitement more than fear and the whole series was treated like it was a pilgrimage to Mecca rather than prison.

While Lil Wayne was parading around in videos preparing himself for prison Baby, the man who entered the game by signing a group of 13 and 14 year olds and naming them "The Hot Boyz", was busy protecting his public image on radio. When asked why he and Wayne were kissing, he simply replied: "Wayne is like my first born son, i kiss him, i love him. That's are thing." He also admitted how his real son receives the same snogged up treatment.

I just wonder if Wayne's nickname, "Weezy F Baby", is a secret code, confessing his love for his mentor. Just listen to how he passionately growls it on songs. Maybe his really moaning Weezy For Baby!