USA Chicago rapper Yung Berg has once again been stripped for his jewels . . . this time by an underground rapper from North London. 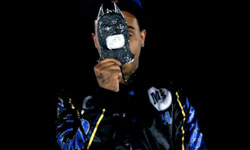 Yung Berg who, featured on Ray J's "Sexy can I", didnt dispute the claims that he was stuck up for his Batman chain by UK rapper Rowdy-T but he announced in a radio interview yesterday, that he has lots of chains and the only reason he is bothered about getting robbed is because he was planning to give the diamond encrusted peice away to charity, to a kid who loves batman. (See the Ray J and Young Berg video below to jog ya memory!). Then scroll down to see the response.

It seems Yung Berg's claims are nothing more than a publicity stunt intended to justify why he hasn't retaliated for getting his chain snatched. The former Bloodline records rapper (DMX's label) now looks as if he is nothing more than a studio gangster as Rowdy-T, quite comically, flaunts the huge, blinging batman pendant around in video's posted on youtube.

It appears that the Tottenham born rapper is using the robbery as a way of propelling his music career in the states. He recently moved to Miami, Florida and has clearly wasted no time in creating a buzz around his name but only time will tell if one of those American cats decide to put his gangster to the test.

Below is a video by Rowdy-T for those that don't know and below that is a video of Yung Berg with his chain before it got took - or given away! LOOOOOL!: