A gun battle took place in the early hours of Sunday (03.10.2010) morning that had people barracked in Vietnam Bar in Winson Green, Birmingham.
As the vibes start to build up in the club, gunmen were loading up the weapons aimed to murder people who were partying in Vietnam Bar which was ram wida whirla gyal. A car pulls up outside the venue an a bag of man get out an start bussin shots. Everyone runs, but shots start bussin back at the car! Women are screaming, security are hiding and bullets are flying!
Inside the venue people are hiding behind the bar, behind the speakers and even behind other people. The dance was entitled: Slow Motion Fluffy vs Slim Girls - The bigger the person you were behind, the better (they must can stop bullets!). Supatrax gets a first hand account of the situation as gunmen surrounded the venue and buss shots! Read her story below:
"It's Saturday 2nd October 12.30am - well I guess you could say its now Sunday. The ladies are in the party mood, but who woulda thought in the next 4 hours we haffi back off we shoes and run fi we life??...kmt..
Imagine your enjoying your self in the party (Vietnam bar) your back arlla start sweat and the infamous X-TA-C 4x4 enter the building just as we start back it up, all I hear is BUP!!!!
The MC on the mic says: "Calm yourself, just a champagne bokkle buss, nuh worry" - I'm thinkin to myself - OK that's not bad then, I guess . . . But then I started thinkin to myself: Vietnam must've had a great night on the bar cah within a few minutes im sure arlla 15- 20 champagne bokkles mussa buss, if dat was what the MC was on about. . . kmt! Now, I don't know bout you? But have you ever have seen grown man run from Champagne bottle popping off!!!??? This was far from a simple champagne bottle cork, it was world war 3 and 4 rolled into 1.
They weren't no Champagnne cork, they were rar gunshot! And the more the crowd ran for their life, the more shots where let off . . . Just when you thought you want to make a clean get away you run for the exit and all you hear is BUP BUP BUP!!!!! . . . . As you run for the fire exit, again BUP BUP BUP!!!!! 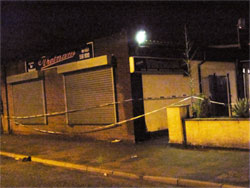 At this point the only thing going through my mind is WEH MI FREN DEM DEH???? It was a sight to see half of the club crowded around in unity around the bar ducking for their life flinching at the sound of every gun shot. The other half of the crowd were in a huddle around the stage hoping one of the djs will act as a human shield . . . . Yeah good luck with that!!! (They were off quicker than the gyal!!!) And where may I ask were all the security who were at one point going on bad at the door??? . . . . Yeah -  I'm assuming somewhere behind me!! Becar, they could not be saw for dust!!! The gunshot mussa went on for about 5 - 6 mins! I thought I was gonna dead!!!!
What really is the world coming too when you can't even go out and enjoy yourself without the thoughts of being stampeded or even worse shot dead!!!! The worst part of the experience is too see grown strong black woman fall on their face, batty outta door and watching them cry with fear!! Is this what we really need to be going through as black people?? . . . As Black History Month reminds us - Haven't we been through enough already? Day 2 of black history month, when we should be standing together and showing unity as Black people, these inbreeds felt the need to shoot up a club (or at individuals in and round it).
People outside the club saw a vehicle drive up outside the club. Minutes later men evacuated the car and began letting off shots. The sound of bullets hitting the wall was enough to make the witness duck for cover in their vehicle. Shortly after the same car fled the scene!
Once the sound of gun shot ceased the trapped party goers rapidly dispersed from the club, leaving behind shoes, bags and what ever else they felt was holding them back. Once you thought you were safe, you then had the task off dodging vehicles who tried to drive off for dear life - erm, yeah - Don't worry about me I'll get out your way on the pavement!!! WTF!?
Not only were we dodging bullets, we were dodging grown mans cars, and not at any point did a promoter or DJ even offer to give the stranded females a ride to the taxi rank or nearest bus stop!!!! Hmmm . . . remind me next time you offer me a flyer to your darnce to decline with the middle finger! KMT!!!! Where is the unity and support for one another - especially in times of need?
Now, there's an argument bout who it was!??? . . . Da English people blame Da Yardies, Yardies are blaming the English, Burgers are blaming Jonnies . . . At what point do you really think any1 ask the gun men weh dem barn?? . . . . Defiantly no one in the club asked anything - They weh too busy ducking for cover, trying to save their life!
This is the point to reflect on our actions and what we are doing, not only to our community but to black people as a whole!!!! . . . . It's not about where we were born or what crew we from, we are all black people and we are better than this! It sure as hell has nothing to do with it being your ends - coz I can tell you without a doubt its more my ends, than the guns mans ends! - I pay taxes . . . FOOD FOR THOUGHT!!!"

As you can see there was bodies and bullets all over the place! At this moment there is only one reported person being shot. He received a gunshot to the bottom! He is in a stable condition and the shot wound was not life threatening.

Supatrax sent a team down there on Sunday evening to get a photo of the venue which remains under 24 hour surveillance, with a police officer posted outside the club. Police tape seals the entrance to the club but the road is open for public use. All this happens on the same weekend that the Prime Minister is in Birmingham and the police announce that over 2000 jobs will be cut from west Midlands police - Wat a ting!

Keep it locked to Supatrax for further info. If you were in the venue, email your thoughts and accounts of things to: This email address is being protected from spambots. You need JavaScript enabled to view it.